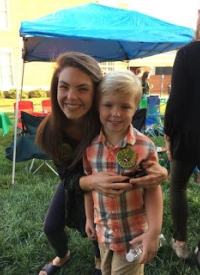 Over the course of the last four years, UNC Charlotte has become my home away from home. The Levine Scholars Program has provided me with a support system resembling a family, with fellow scholars becoming more like siblings than classmates, and faculty members looking out for me both in and out of the classroom. Just like any family, the Levine community has demonstrated to me the importance of encouragement and lifting others up, especially during difficult times. When Jefferson Cooper, a best friend and a member of my cohort, shared that his father Nelson had been diagnosed with ALS, I knew that I could count on this Levine community to rally and show their support for the Coopers.

Since the beginning of Jefferson’s time as a Levine Scholar, The Cooper family has been a constant presence and support within the program. Volunteering as panelists at Finalist weekend, making rounds at the annual Chancellor’s dinner, cheering on the Niners every fall with season football tickets—it is likely that most people have crossed paths with the Coopers at some point or another. It is safe to say that you can count on a fun sports conversation with Nelson or big hug from Mary Ann whenever the Coopers are around. Because the Cooper family is so special to the LSP, I quickly recognized that many scholars, faculty, and family members wanted to show their support and encouragement. I immediately starting thinking about ways that we could show our support on a programmatic level and decided that Homecoming Weekend served as the perfect time to bring everyone together. 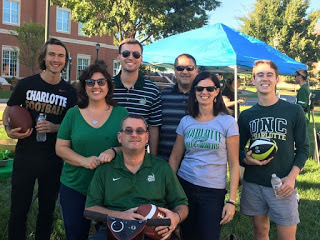 With help from the Levine office, I partnered with the Richardson family to host the “CoopStrong Homecoming Tailgate.” In addition to making event buttons that were sold at the event, we also launched a GoFundMe page during the weeks leading up to the tailgate. Of course no tailgate is complete without food, and Dr. Mike and Kelly definitely out-did themselves by preparing an entire Thanksgiving spread. The day was filled with so much happiness as of scholars, friends, and family members came together to give Nelson a hug and to show him how much he means to us. To my surprise, Mr. and Mrs. Levine even stopped by the tailgate. More than anything else, the success of the event proved to me just how strong the Levine community actually is. While this was the last time that I will attend a Homecoming Game as a student before graduating in the spring, I know that the Levine Scholars Program and UNC Charlotte will always exist as an extension of my own family. This year’s Homecoming Game showed me what it truly means to “come home.”