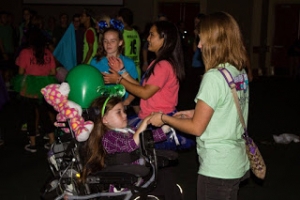 It’s Friday, November 4th. 6:58 pm. UNC Charlotte students and their friends from Levine Children’s Hospital are lined up side by side, decked out in beads, tu-tus and other festive attire to represent their color group, preparing to dash up the steps of the Popp Martin Student Union to kick off one of the most exciting events of the year: Dance Marathon.

From nine in the morning, until five in the afternoon (just enough time for a very quick power nap before the event officially started), various scholars, joined by building services and other volunteers, gathered at the Union to put the final touches on decorations and other preparations. My job was to cover the stairs in streamers from top to bottom, and to help paint the signs for color rooms. Others helped with decorating the top level, blowing up balloons and hanging signs. Some members of the catering committee spent the day picking up food for the event.

After the legendary stair climb, we all entered into the main room, greeted by disco-like lights and the fun decorations from this morning. Everyone immediately began swaying and shaking to the music. One of the Miracle Kids took center stage in a group I was dancing with, twirling her wheelchair to the beat of the catchy pop music. We later learned that she loves to dress up as Disney princesses, and that for Dance Marathon she wore her very favorite dress: Elsa from Frozen’s blue dress.

Soon after seven, the mastermind behind the organization of Dance Marathon and sophomore Levine Scholar, Danielle, got up onto the stage and announced the official kickoff of the night. She also explained that periodically throughout the night we would be able to hear the stories of some of the Miracle Families that had experience with Levine Children’s Hospital and sometimes, even see the amazing children speak themselves about their time at Levine and how they’ve grown up since.

The night began to fly by as the families told their stories between lessons from the Morale Committee on the official 2016 DM dance, many more songs, and plenty of opportunities to chow down on the delicious food. Each individual story was simultaneously inspirational, heartbreaking, and hopeful. Hearing about the hardships and challenges that the carefree children I had just been dancing with have already faced in their lives was tough, but seeing their bright faces when they got down with us to a group dance lifted my spirits. No matter what they’ve faced, these kids are strong and resilient.

As the final few families had the chance to tell their story, many of the kids started to get sleepy as the hours of dancing wore them out. Many of the Miracle Kids had to go home to get some rest through out the night. UNCC students stuck around for another seven hours, showing their respect for the families and their dedication to the cause. The rest of the night was filled with dancing games, drawings for prizes, tons of food, Zumba, and a DJ Battle. Students sustained themselves on cake pops, bagels, coffee, fried chicken, tacos and a variety of other food, all donated. 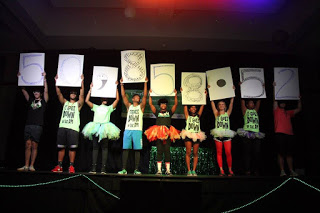 Finally, as the sun rose, those who made it through the entire night gathered in the main room for the big reveal. After awards for spectacular fundraising and a big drumroll, the leaders of Dance Marathon took the stage and raised the numbers one at a time. $50,858.52! The culmination of months of work and dedication from every participant, 2016 brought the most money raised in the history of Charlotte Dance Marathon. Everyone went home exhausted but proud of the spectacular work we had all done “for the kids.”