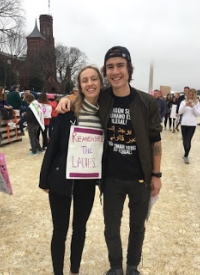 On Saturday, January 21, 2017, I took to the streets of Washington, D.C. with anywhere between five hundred thousand and one million marchers as part of the Women's March on Washington. Caroline Fowle, Addy Goff, and I carpooled together on Thursday evening to prepare for and attend the march. When Saturday morning came, the metro was packed over capacity, as more people flooded to the mall than had the day before for the Inauguration. I've been to some massive protests before, including the People's Climate March in New York City in 2014, but I don't think I have ever seen this many people in one place. As far as one could see was a crowded but beautiful sea of pink hats and protest signs.

Several other Levine Scholars and Alumni attended the march, some of whom I did not realize were in Washington until I saw protest photos on Instagram or Facebook later that evening. I was -- to my knowledge -- the only Levine Scholar at the D.C. march to not identify as a woman or as female. The scope of the march, however, was by no means limited to any single issue or constituency. Janelle Monáe led the crowd in her #BlackLivesMatter anthem, "Hell You Talmbout." Native American demonstrators made their presence known, carrying the slogans of the movement in Standing Rock for clean water and against the North Dakota Access Pipeline. Muslims, Jews, atheists, and Christians marched together against religious bigotry. LGBT folks voiced their concerns and their demands in the face of the new administration. Many immigrants at the march carried signs declaring that they were "undocumented and unafraid."

The march was a beautiful reminder of what our world can look like, even if it doesn't look that way today. Millions across the United States marched that day, in Los Angeles, Chicago, Austin, New York, and Charlotte, just to name a few. I knew family, friends, and fellow Levine Scholars at the march in Charlotte, which drew nearly twenty thousand people. The numbers, of course, are less important than the people themselves. It was an honor to march with friends and make new friends in the streets at the Women's March, and to be present in their frustration, anger, fear, sadness, and defiant joy. Feminism and other justice-oriented social movements flexed their muscles on January 21, and that ought to be encouraging to us all.