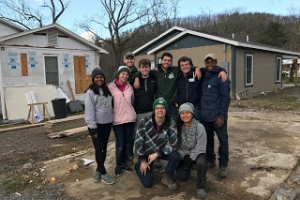 Wednesday, May 3, 2017
On March 5th, 2017, nine Levine Scholars from the Classes of 2019 and 2020 departed Charlotte, NC on their way to Lewisburg, West Virginia for the program’s first-ever Alternative Spring Break trip.  Accompanied by the LSP Director, Dr. Zablotsky, the LSP Scholar Coordinator, Billy Roosenberg, and an integral LSP consultant, Richard Smith, the 12 members set out not to achieve success but to create a lasting impact on a community in need of a helping hand.
I can’t speak for the group, but I had no idea what we were about to experience. We had prepared well for the trip by hosting multiple orientation sessions and recruiting experienced faculty from the Geography Department just to educate us on the Appalachian region. We became familiar with where we would be, but there is no preparation for the type of people we might expect to meet. Upon arrival, we met the director of Almost Heaven Habitat for Humanity—Lori Greene. She welcomed us to West Virginia and briefed us on our team leads for the week-long project as well as the work we would be doing. It was unsurprising to learn that teamwork was going to crucial for the week ahead—between the Habitat work and the preparation of meals, we had to be efficient with our time and communicate effectively to make a difference.
Our first trip to the work site was Monday morning. The work began with a meaningful prayer by Team Lead Luther (known to many by the name of Lord Luther). This tradition would carry on for the remaining days of work. We would arrive early, get briefed on our assignment, and participate on a group prayer lead by Luther. The group prayers were a fantastic metaphor of our presence in West Virginia and that’s why I looked forward to them as my favorite part of the day. We came together and, with a similar goal in mind, set our attention on the job at hand.
Lewisburg, West Virginia was not randomly selected as our alternative Spring Break location. We were there to help families who experienced excessive flood damage to their previous homes. Habitat works with these families and provides them extremely-low interest rates so that they can begin to live a normal life again and still maintain the title of homeowner. While working inside the house, you could find the future homeowner busy on job assignments of her own. She painted, measured, and consulted a number of projects within the home. That’s one of the reasons this trip hit home for so many of us because of who benefits the most from this trip.
We showered in a different facility from the one we slept in. It wasn’t an inconvenience though, because we shared the showers with other groups working in Lewisburg to make a difference. Communicating with these folks helped to remind me of the kindness of people. I made the decision to go to West Virginia based fractionally on the lack of activities I planned for Spring Break, but the other groups made the conscious decision to come, not because they had nothing better to do, but to improve the lives of others and that’s important.

We had  a few extracurricular during the trip, but the most representative one was our Tuesday night trip to the Heritage Music Hall and here is where we meet Pauline, an 81-year old widow from Monroe County (she drove 30 minutes to get here and wouldn’t let us forget that!) She divulged to us that very few of the women present tonight were actually married despite their multiple dances with one man. She explained this to us in an effort to display the dominance the men have over their favorite women. While not representative of the whole of West Virginia, this idea resonated with me the rest of the trip. I believe it’s a side-effect of the deep-rooted culture of the Appalachian region, but there are a plethora of articles out there right now explaining just how wrong I am with that observation.
What a week it was! From exploring caves to swinging sledgehammers, the Levine Scholars Inaugural Alternative Spring Break was a success. Everywhere we went, we received thank-you’s for the work we were doing. If you asked any of the nine scholars (including myself) if they would do it again, I’m positive all nine would confirm. Habitat loved us so much that Lori asked us to sign an agreement for next year! While we politely declined Lori, be on the lookout for more Alternative Spring Breaks from the Levine Scholars Program in the future.