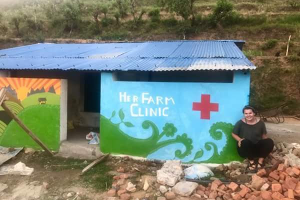 As I desperately clung to the waist of a man I had met 5 minutes prior on the back of a motorcycle climbing a dirt road ascending a mountain to a women’s farm in the Nepali Himalayas with a backpack that had nothing in it but a watermelon, I had to ask myself: how did I get here?

It all started on a flight from Delhi to London the previous summer when I was being medically evacuated from the Indian Himalayas. As I sobbed into the arm of a stranger because I didn’t want to leave, I vowed to get back to India whenever was next possible. As a Levine, this meant my last summer experience. I found a program through ECU that would have me in India for a month researching how religious sites influence the culture of the towns surrounding them. I quickly applied and was signed up to go by December of 2016. However, 10 days before I was scheduled to be on a flight to Delhi, I received an email from the professor stating he was too sick to go and the trip was cancelled. I quickly had to find a way to spend a month abroad before I had to be back to the US for another trip.

I ended up choosing Her Farm Nepal, a woman owned and operated farm in rural Nepal. I closed my eyes, wished for the best, and bought a flight to Kathmandu 3 days before departure. Once I arrived to Kathmandu, I found myself in a taxi, winding through the chaotic streets for an hour until I arrived at what I hoped was the guesthouse I had booked the day before. The next day, I hopped on a minibus to the city center’s bus stop, where I walked through, yelling “Madhbhesi” until a driver finally took pity on me and said they could stop in Madhbhesi on their way to Pokhara. As the goat bellowed on the roof of the bus, we climbed up and down the mountains, passing piles of trash on fire and beautiful terraced hillsides. After 4 hours, the driver stopped out of nowhere, pointed at me, and said, “get out.” I got out, found my way to the café the farm told me to phone from, and called them to say I had arrived. They told me to grab lunch and someone would be down to get me soon.

Her Farm being a women’s farm, I expected a woman to gather me and show me the path up the mountain. Instead, a man in his 20s came up to me and said, “follow, sister.” Again, hoping for the best, I followed and soon found myself switching backpacks with him and hopping on the back of his motorcycle. Now, if someone was telling me this story, I’d be picturing Nepal’s version of the Lizzie McGuire movie, but I’ll tell you now, this is not that story. Instead, I’m hanging on for dear life to a man that I’m still not 100% convinced is with the farm, trying to take in the view, and debating whether or not I should tell my parents about this if I do happen to make it through this alive.

We finally got to the top of the mountain, where Her Farm owns a large plot of land and I took my first deep breath in 73 hours. I think the entire experience at Her Farm was only made better by my chaotic journey there because I had no time to form expectations, no time to spiral out about nerves, and no time to worry about anything other than completing the next step of my journey. It all goes to show that sometimes, when things don’t go according to plan, it can be all for the better; just close your eyes, hope for the best, and hold on tight.