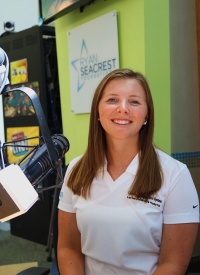 “Good Afternoon Levine Children’s Hospital, DJ Dani here live in Seacrest Studios and today during Weather World we’re talking about thunderstorms!” This is how I get to start my day twice a week at Levine Children’s Hospital (LCH) in Uptown Charlotte. I have had the opportunity to intern at Seacrest Studios this past semester and interact with kids from across the Carolina’s, while developing and improving upon the broadcasting skills needed to join the news media in the future.

The Ryan Seacrest Foundation built Seacrest Studios in Levine Children’s Hospital just four years ago. Having the studio at LCH is a testament to the incredible staff and work they do, as the Seacrest Foundation has only built 10 of these studios across the country in the best children’s hospitals. The aim of these fully equipped radio and television studios is to uplift the spirits of kids who have to spend their time in the hospital.

My time in Seacrest Studios has been beyond what I thought it would be. I host bingo once a week and deliver prizes to winners in their rooms. I interview guests, from football players to beauty queens, and quiz them on their Disney knowledge. I have dressed up as Princess Anna from Disney’s Frozen and surprised kids in their rooms. One of the most fun parts for me is that I get to host my own show about the weather and about science for an hour each shift and quiz patients watching from their beds. This internship has allowed me to combine my passion for the weather along with entertaining and uplifting kids going through a tough time in their life.

Every show that I host in Seacrest Studios has a specific theme. Whether that be from hurricanes to thunderstorms, each show talks about some weather phenomenon. I explain the basics of it, show some fun videos, and quiz the patients, who are able to call down from their rooms to ask or answer questions and go on air. At the end of each show, I forecast the weather for Charlotte over the next few days and even get to use the green screen!

The best part about interning at Seacrest Studios is hanging out with the patients. Despite being in the hospital, the kids at LCH are always ready to have fun and play games. Those that are able come down to the studio and host their own shows do. We teach them about the equipment and let the kids host shows that range from animal shows to basketball shows and analyzing highlight reels from the latest Hornets game.

Interning at Seacrest Studios the past semester has been the perfect combination of strengthening skills learned in the classroom in a more realistic situation, while also giving back to the community in the most perfect way that I can think of.