One Year Later: Both Sides of Finalist Weekend - Matthew Hoffman '21 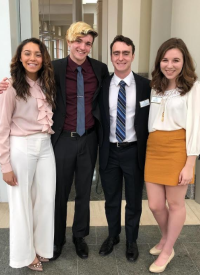 One year ago, when I was walking into Levine Hall as a nervous finalist, I had no idea what to expect. I didn’t really know a lot about UNC Charlotte, or even the Levine Scholars Program, I just knew I was going to do an interview for a big scholarship and then go home to make up all the homework I had missed. I never expected how much my perspective would change over the next two days of Finalist Program, or in two weeks when I got my acceptance letter, or in one year when I would sit back down on the other side and meet the next set of Levine finalists.

I was so stressed out during my finalist weekend that I only remember certain fragments of the whole weekend, and most of them are related to the food I had (especially the edamame dumplings at the reception and the stuffed portobello mushrooms at dinner on Sunday). I remember walking into my interview, sitting down at the chair, and then I remember being outside talking about how it went. I remember being told that every minute of Finalist Weekend was an interview, and being scared to even yawn after that. But most of all, I remember the people I met there—the staff, the current scholars, and the other finalists. At the time, I didn’t think I would ever see any of those people ever again, but I still thought it was fun to meet lots of interesting and unique people. I had no clue that some of the people I met in my group discussion, at the student social, and just waiting for interviews would end up being the people I spent three and a half weeks in the wilderness with.

One year later, it was time for my first Finalist Program as a scholar. I was eager to go through everything without having to worry about any of the stress of interviews, and still getting to eat some of the food. The idea of being able to talk to people about why I love UNC Charlotte and the Levine Scholars Program was exciting. I did start to question myself, though, when I worried that I didn’t actually have enough experience to talk to people about. I’m just a freshman, I’ve only barely finished a single semester here, and I still have the vast majority of my experiences ahead of me. Then I thought about it more, and I reflected on everything that I have already gotten to do in my (almost) one year of experience. I’ve literally trekked over mountains, I’ve gone to a Broadway play, and I just recently set up an internship with a nonprofit in Charlotte—all because of this program. Not only is it astounding to look back on how much my life has changed in the last year, it’s incredible to know that this is still just the beginning.

When I was talking to the finalists this year, I was constantly reminded how little of what was ahead of me I could imagine then, and how I will say the same exact thing one year from now. I also got to be excited for the finalists. I had no idea I would end up living and spending my time with all these people I met at Finalist Program, and most of this year’s finalists probably never thought about that either. But pretty soon they’ll all get to realize the person they sat with at lunch or talked to before their interview is going to be someone they spend the next four years with, and I think the idea of that is just amazing. Finalist Program one year ago was one of the most exhausting moments of my life. This time around it was much more stress-free, and it reminded me how amazed I was when I first learned about the Levine Scholars Program, even if I didn’t get quite as much free food this year.