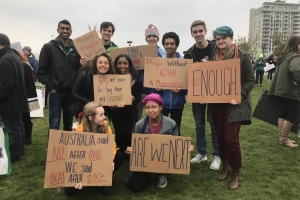 On Saturday morning, March 24, I joined 7 freshman Levine Scholars, 7,000 Charlotteans, and millions worldwide to march for increased regulation and restrictions on firearms. The March for Our Lives spanned 800 cities, the largest student-led protest since the Vietnam War.

We woke up early on that foggy morning to take the light rail into Uptown Charlotte. The UNC Charlotte stop had just opened, and we felt our anticipation for the protest growing as we watched the city roll by from the train windows.

This was not my first march in Charlotte. I attended the Gay Pride Parade in August, but that’s what that march was all about – pride. This one, rather, was marked by a deep sadness and shame for our country’s relationship with gun violence.

The focus of this protest was clear: children. All but one of the speakers were high school students or younger. Criss and Ella Berke, survivors of the Sandy Hook shooting, spoke about the persistence of school shootings and called for reform. Students demanded that politicians find a solution to this American epidemic and encouraged their audience to “vote them out.” Small children ran around with signs, some with pictures of schools and guns on them, others more direct, signs asking “Am I next?”

Although we were gathered for a somber occasion, it was empowering to experience Charlotte’s reaction to the recent shootings and attend the march alongside fellow scholars. It gave me hope to run into Dr. Zablotsky, upperclassman Levine Scholars, and two of my favorite professors, all there expressing the same frustrations. With powerful people by your side, change seems possible.