Playing for Others - Lauren Tooley '20 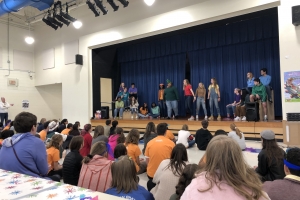 One of the most influential decisions I made as a Levine Scholar came very early on in my college career. Midway through my freshman year, I decided I really wanted to complete my nonprofit internship at Playing for Others (PFO). The decision came about almost serendipitously. I was looking for a nonprofit that worked in the arts, as I am a double major in Dance and Marketing. There were larger organizations that may have seemed to be obvious choices; however, I was looking for a smaller organization that had a direct line into the community that I was now calling home. After a quick Google search, I found PFO, a need-blind teen development program that uses art experiences to teach leadership, service, and personal development. Excited at the information I had stumbled upon, I quickly ran to speak about this hidden gem with Dr. Z who confirmed through her personal connection to the organization (her son went through the program and now writes musicals for them) that PFO in fact did work with the local community through art to teach these vital skills to local youth. I continued to pursue PFO as the place for my nonprofit internship and after meeting with the staff, I knew it was a perfect fit.

I spent an amazing summer with PFO working in their small office with a staff of four, which became five by the end of the summer when they hired a Development Manager. My tasks varied every day, from organizing the office to creating a scavenger hunt for the teens. Because I worked in almost every aspect of the organization, I was very familiar with both their challenges and successes as an organization. When I entered into my sophomore year, I knew that I wanted to partner with PFO for my Civic Engagement Project. While I didn’t know what the project would center around, I knew my partnership with the staff of PFO was strong enough that any project would be a success.

Next came a long series of conversations between myself, the staff of PFO, and Dr. Smith, the Levine Scholars Program’s Faculty Fellow, who advises scholars on their civic engagement endeavors. Because I wanted to approach this project from the nonprofit’s perspective, I first went to PFO and asked, “What do you need?” The answers varied, from a new source of revenue to increased awareness in the community. Each idea we workshopped together was then presented to Dr. Smith. She and I would talk through the pro’s and con’s of the idea and ultimately decide if it was appropriate for the Civic Engagement grant. This process went on for two years, going back and forth between PFO and the Levine Scholars Program.

Finally, my senior year, a plan came into place. PFO had just had a staffing change and was missing a lead over their buddy program. Their Buddy Program pairs the PFO teens with a child with disabilities or their sibling, in which they explore the arts, perform community service and develop a deeper understanding of the many ways in which we are all more similar than we are different. Historically, this takes the form of monthly buddy events that have activities for the teens and buddies to do together. As PFO has evolved, they have been working toward increased buddy involvement, which has meant putting buddies on the stage alongside the teens during their annual musicals.

They were looking for help with this project and everyone agreed this was the right moment for me to step in. Assisting with this project required a deep dive into their programming to understand what was successful, or not, in the past so I could help move their programming forward. I also stepped out of my comfort zone, as I have never worked with kids with disabilities before. To help ensure I was successful, I spoke with my fellow scholars to draw on their experiences to ensure I came into the project with an educated perspective. It was intimidating to step up and plan large events, but both the PFO and Levine Scholars staff were supportive and understanding throughout the whole process, which gave me the confidence to complete the project.

In November, PFO combined their buddy event with an introduction to an original musical so the buddies could understand the theme of the show and get a preview of the music. I helped plan this event and used the Civic Engagement grant to pay for supplies. Then in March, they performed an original accessible musical, which allowed any interested buddy to perform. This three year long partnership was the most rewarding part of my college experience and I am so happy I was able to see it through before graduation.