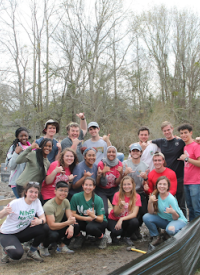 When I heard about Alternative Spring Break (ASB), I was skeptical. After all, this was my first college spring break. Why not spend it at the beach or at home seeing my high school friends? However, the more I heard from upperclassmen, the more I was intrigued. After participating in the trip, I can say that it was well worth not spending a week at the beach or back at home. One of my favorite parts of the trip was bonding with the upperclassmen as well as growing closer with people of my own class. Our trip was blessed with an array of Levines with such diverse personalities that there was never a dull moment. The church we stayed at was quite nice, despite the mishap on the first night. As we were settling in to go to sleep, we were told by Dr. Z to pack our things and be ready to leave. The pilot lights on the stove had gone out, leading to a buildup of propane that was not safe for us to sleep in the building, and the gas company was not scheduled to come out until the following morning. We all packed our things and loaded the vans back up as we headed out to the only hotel in town that had any rooms available (the President just so happened to be holding a convention in North Charleston that night). I would have to say that the van ride to the hotel was one of the funniest parts of the trip, producing the iconic describing the stoplights (all turned on to caution mode at midnight) quote from Dr. Z: “They work, you just don’t know it.” We all piled into the hotel lobby laughing and exhausted- it was after all almost midnight. We took the last rooms of the hotel and went off to sleep, ready to go to work the next morning.

The laughter, adventure, and comradery of the first night all set the tone for the rest of the trip, which proved to be very lighthearted and fun despite the amount of work we were doing at the worksites. I have had experience on service trips before, as well as working construction, and have to say that Habitat for Humanity is very well equipped to empower volunteers to learn and grow while helping others. While there, the team was able to rough level two full yards, move several hundred blocks into position, and set the first layer of a new house’s foundation before the rain moved in. This was also a high point of the trip for me, as it gave several hours a day of physical activity while also allowing time to bond with other scholars. It was during this time that I learned how to play the “hat game,” as well as being dubbed “Trenchton” by Sarah. As a Freshman, this was invaluable for me as I was able to build connections and friendships with juniors and seniors at a much deeper level than normal Levine programming on campus. It also showed me the work effort of the Program, and what a powerful force we can be if we work together to accomplish something. The worksite also led to unlikely similarities, which then led to bonding. Dmitry, Jacob and I shared many laughs over how sunburnt we were after the first day, or when several of us went out in the pouring rain to push the van out of the mud. The site also gave many opportunities to take initiative and hone leadership skills. I was able to lead by actively participating as well as occasionally bypassing the pick (literally a pickaxe) and doing my part to empower others to learn and lead for themselves. This left me feeling amazing at the end of the workday, knowing that I had done my part in building a house while also building friendships.

We also worked at the ReStore for a day and a half after the rain came in and the ReStore was just as fun and rewarding. Although I was doing furniture and donation pickups the first day, on the second I spent several hours in a small room with a few scholars trying not to get a headache from paint fumes. This led to a lot of laughs and a lot of very good conversations, which were worth the fumes. Painting also helped Habitat in a way that was much needed but very easily overlooked.

Despite the work, the ASB trip was far from grueling. In fact, every evening there was time to hang out in the gym or go to the local park, which was always a good time. This is when I learned that I am much better at frisbee than I am at slacklining, but that both are better than my ping pong skills. This time is when we could all hang out, individually or together, and reflect on the day or play games to pass the time. This was also when the cook groups made some delicious meals. It made for a great time and was one of the things that I looked forward to on the trip. There was also a day off, which we used to explore Charleston. This was amazing, as I had not seen the city in a very long time and was able to take in the views on the battery and Rainbow row with new friends. There was a lot of goofing around, such as holding birds or taking boyband pictures, and there were serious conversations such as talking about the intricacies of religion and the oppression that founded Charleston as we walked through the old slave auction market. We also had a half-day off in which we went to the beach at Isle of Palms. Sadly, it was quite cold but that did not stop many of us from getting in. Those who didn’t have the opportunity to shop, walk the beach, eat, or play spike ball. On the same day, we had the traditional full class dinner out, which was a great time. Although this is very specific to me, I also was able to celebrate my birthday on the trip. I found balloons in a tree, and at dinner, I was surprised with a dessert and trick candles. This solidified that I had in fact made new friendships that would last. Overall, I feel as if the leisure time on the trip was just as valuable as the work, albeit in different ways.

I feel as if ASB was a wonderful experience, and will most definitely be trying to go back and possibly lead a trip in the future. The work that was done made a real difference in people’s lives, and that in itself makes the trip worth it. However, the relationships and memories elevate ASB to one of my favorite Levine memories, right up there with NOLS. When next year’s trip comes around, I would highly encourage you to apply. You won’t regret it!