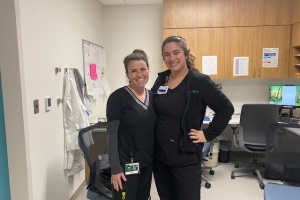 Everyone has role models throughout their life, but how often do you find someone who is just a few years ahead of you on the exact path you want to follow?

For as long as I can remember, becoming a midwife was my ultimate goal. When I would tell others, it was not uncommon to get some funny looks or even the occasional “wow”. I expected a similar reaction when I walked into Dr. Zablotsky’s office for my first meeting freshman year. Instead, she smiled and said, “We have an alum who is a midwife. You will love Caroline.”  This time I was the one saying “wow”. What were the chances?!? Currently, in the United States, there are less than 7,000 midwives in total. The thought that out of the only 50 or so alums at the time would be a midwife seemed impossible, yet here she was. The woman that I wanted to be.

I’ll admit that the first two years I did not reach out or take advantage of this connection in the ways that I should have. I felt too young and inexperienced to be wasting the time of a professional. I realize now how much I would regret that decision. When Junior year rolled around, I finally met Caroline at Finalist Program and first began our correspondence. She had words of encouragement for me, contacts to help me get involved, and answered my many questions. She was the only person that could truly understand what it was like to have this overwhelming desire to deliver babies, coupled with all of the opportunities that the Levine scholarship provides. The world was my oyster, and I found my pearl in Takoradi, Ghana. I spent the summer before my senior year working in Effia Nkwanta hospital on the labor and delivery floor. My love for midwifery grew and was solidified.

Over the next year I reached out from time to time to ask advice and keep her updated on my studies, and this past semester I shadowed her on the labor floor at Cone Hospital in Greensboro. I had shadowed midwives before in Chicago, as well as worked alongside them for the summer in Ghana, but this time was different. The day before I was set to follow Caroline, my distant goals became my reality. I received my acceptance letter into the University of Illinois in Chicago’s doctorate of Midwifery program. My questions went from “I hope to be a midwife. What would it be like?” to “I AM GOING TO BE A MIDWIFE! What will it be like?” The day was amazing. I was able to see every aspect of the job from handoff in the morning to postnatal care of a mother and even a birth to add a cherry on top. The only disappointment was that I waited until my senior year to really form this relationship. I left the hospital kicking myself that I had not taken the initiative to shadow sooner, but smiled knowing that I had a new friendship and mentor for this new leg of the journey.

As my time at Charlotte is coming to a close, I find myself reflecting on the last four years and the Levine Scholars that have helped me on this nursing journey. Christie Koehler sat at my finalist table as a graduating senior nursing student, probably not realizing that this incoming freshman would bombard her with questions for the next four years. Caroline Neill probably never guessed that another midwife would be riding her (white) coattail so soon after her. Lauren Tooley and Julia Nelson definitely didn’t accept the scholarship thinking they would live with a girl for four years that never stopped talking about births. Whether they saw it coming or not, I could not be where I am today without each and every one of them. I can only hope that I have been and can continue to be a ‘Caroline’ for the future Levine nurses. To share my time, knowledge, and experiences with each one of them in the hopes of making their journey as incredible as mine has been.