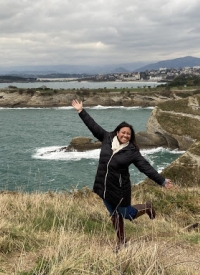 Ever since my sophomore year of high school, I’ve had dreams of studying abroad. I wanted to learn foreign languages, meet new people and experience other cultures, so when I became a part of the Levine Scholars Program, I was beyond excited for my dreams to become a reality. In my very first semester at UNC Charlotte, I was sitting in a Spanish class when an OEA advisor came in and spoke to us about the “Semester in Spain” study abroad program in Santander, the northern coast of Spain. She explained to us that the program was designed for Spanish majors and minors to take an entire semester of classes in Spanish, live with a host family, and improve significantly in language fluency. I knew then that the program was perfect for me.

When the day finally came to take off, I could barely contain my excitement. I arrived at the airport to find the eight other students that were a part of the Semester in Spain program: two other UNC Charlotte students, four people from NC State, a girl from ECU, and one student from App State. Many of us had never been to Spain before, let alone Europe, and we were all just so excited for what the semester had in store. We traveled for over 24 hours before we finally arrived at the University of Cantabria (UniCan), where we would be taking all of our classes, to meet our host families. I was met by an older, short woman and her son that seemed to be about our parents' age. They began speaking in rapid Spanish, asking me lots of questions to try and get to know me. My jet-lagged brain could not follow the conversation, and I immediately began to feel discouraged. The reality of living in a country where I barely spoke the language was sinking in, and I was feeling overwhelmed.

Over the next couple of days, I settled into my host mother’s home and got to know her a bit more. I thought it would be awkward to feel like a guest in someone’s home for such an extended period of time, but she made me feel incredibly welcome- as if I were her own daughter. She was also very patient with me as I adjusted to thinking and speaking only in Spanish. I also attended some orientations for my program, as well as orientations for all international students at UniCan. All of these opportunities allowed me to meet other students that were also feeling overwhelmed and form relationships with people from all over the world. Over the next several weeks, I slowly but surely got accustomed to life in Europe, I learned how to navigate the different cultural norms, read body language, and most importantly, my Spanish improved tremendously. I got to a point where I no longer needed to translate Spanish in my head, I could just listen and respond pretty fluently. I joined a club on campus, traveled to Portugal, and learned so much about the region of Spain in which I was living. I was finally in a place where I felt normal and comfortable in Santander. My friends and I had found our favorite hang-out spots, I had planned more trips around Europe, I was doing well in my classes, and I loved the company of my host mom. I was norming, and it felt really good.

One day at breakfast, my host mom and I were discussing how bad the coronavirus had gotten. The virus was spreading quickly and had finally made its way to Spain. She told me Santander was in such a small part of Spain that it would not reach us, and I would be fine to finish out the semester. Not even a week later there were a handful of Covid-19 cases at UniCan. The next few weeks felt like a whirlwind. The virus began spreading like wildfire in Spain. I had trips to Rome, Belgium, and Amsterdam that all got canceled at once. UniCan was considering shutting down for the rest of the semester. Then, one cloudy Thursday morning we received the news that we had to leave that weekend. Coronavirus had become so rampant in Europe that we were to return to the states immediately. I was devastated at first. I was so proud of the progress I had made in my language fluency and had made such close friendships abroad, that I was not ready to return home. I had three days before I had to leave, so I spent every second of those last few days enjoying Spain as much as I could.

I am now back in North Carolina, safe and healthy. My host mom, friends at UniCan, and study abroad classmates are all doing great as well. Now that I am home and finishing my semester virtually, I am fully grasping how much of a blessing my study abroad experience was, although it was shorter than planned. I see so much more now the value of being immersed in Spanish, as uncomfortable and frustrating as it can be, rather than just taking a few classes online in the language. I learned the value of pushing myself outside of my comfort zone and that so much progress can be made in those moments where I felt the most vulnerable and awkward. I also had the opportunity to learn about ways of life and patterns of thinking from students from all over the world, which helped me to better understand myself and my role as a global citizen. Most importantly, I learned that at their core, people are all the same: we want to be seen, to be respected, and to be loved. I feel that the Semester in Spain has taught me to not only give respect, love, and a welcoming space for everyone as freely as I can, but to expect nothing less than that from others. I am incredibly grateful for the Levine Program for allowing me to have this amazing study abroad experience.