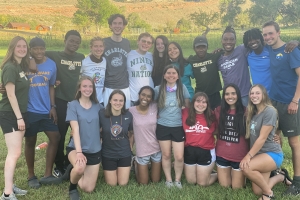 1. Everybody has good and bad days (or moments)— embrace both:

NOLS was one of the most dynamic times of my life. My mood really changed like the seasons out there. When it was sunny, I was at my happiest. When it rained, I was more despondent. And, when it was cold (like in the middle of a hailstorm), I was really questioning why I was even out in Wyoming. Of course, everyone had their unique days of highs and lows. When some were happy and thriving, others were aching and fed up. When some were speeding through a hike, others were sluggish. But, as a group, we had to reconcile these differences so that we could remain a functional unit. As a result, we learned that everyone has good and bad days and that we all need to embrace where we are as well as keep in mind where other people may be as well.

2. All in a Pack (you need less than you think, but keep track of it):

Marie Kondo would be proud of us; a 23 day backpacking trip is the pinnacle of minimalism. The backcountry is far less complicated than our everyday lives—eat, sleep, drink, heat, repeat. In a 45-90 liter pack we could carry enough to stay safe, healthy, and even comfortable in an environment we were unused to. Every item in our packs was imperative to our survival, just as every scholar contributed to the group’s well being.

However, a few scholars had first-hand experience with the consequences of losing any of these essential items. Backcountry-made rain jackets, “haunted” spoons found in logs, and nightly announcements for MIA warm layers are only a few of the shenanigans that resulted from misplaced items. Luckily we managed to keep track of the most important thing— our enthusiasm (and uno cards)— throughout the entire trip.

Going into NOLS, my biggest assurance to my parents was that we had instructors there to prevent us from making fatal mistakes. I did not take into account that they were susceptible to mistakes as well. Although we felt safe behind the instructors, certain instances taught us that the instructors were also fallible and prone to human error. For LCLE-2, this lesson came on the day that we tackled the infamous Raid pass. The decision that day to go over the pass turned out to not be the best decision as a hail storm trapped us for hours (soaking us to our core) and left one group unable to make it over the pass -leaving our groups separated for an entire day. That day was, perhaps, when we first saw the humanity and vulnerability of our instructors. They were not the infallible team that we thought them to be. A quote from one instructor greatly captures this sentiment: “Well, I predicted the weather wrong, like I do every day.”

On our NOLS course, the phrase “tolerance in the face of adversity” was used relentlessly. Big uphill? Tolerance for adversity. Dropped your cheerios in the mud? Tolerance for adversity. But even before NOLS, I was someone who prided myself on my ability to stay strong in the face of most challenges. NOLS reminded me of something else: it’s also important to be vulnerable when you are struggling. After rolling my ankles multiple times, I tried to tough it out and continued to hike because I was worried about slowing the group down, but when we got to camp I could barely walk and started crying. The leaders took my now-known injuries into consideration and we took it easy the next few days, allowing me time to recover. The other scholars on the trip understood when I couldn’t contribute as much, and despite my fears weren’t annoyed. Being vulnerable and admitting difficulty didn’t result in condemnation, it allowed the group to adjust to my needs so I could continue the trip. Although adversity faced in the frontcountry may not be as easy to identify as a rolled ankle, admitting difficulty is just as valuable in ensuring one’s health and wellbeing.

5. Accepting “It depends” as an answer:

Before we entered the backcountry, I had heard at least 5 questions answered with “It depends,” an answer that would continue into the backcountry and as I realize now, throughout my entire life. Even though this was often the most accurate answer to many questions at NOLS, an answer of “It depends,”  often left me feeling frustrated. As someone who finds comfort in structure, especially in a new environment, I was so ready for a straightforward answer. But the reality is so many of our questions have numerous factors that could impact their answers and as one of my instructors said “It depends” is the only answer to all questions. Throughout the course, I realized that “It depends” is the most honest answer and started responding to more questions with that answer, as I got more comfortable accepting it myself.

This lesson was extremely transferable to the front country, especially a front country where the immediate future is so uncertain. In the last few weeks as plans for the fall semester have bounced in so many different directions, remembering all the times at NOLS where my questions were answered with “It depends” and it worked out has been extremely comforting.

At the end of 23 days in Wyoming, we had not only learned to survive in the backcountry— we learned to thrive. I found myself behaving like the person I aspire to be, and I can attest to the resolve, authenticity, and kindness of the scholars around me. Each day reinforced the value of the NOLS experience. NOLS is more than once-in-a-lifetime views, hilarious adventures (or misadventures), and invaluable leadership skills. It’s friendships that will carry us through the next four years, insight that will allow us to support each other in achieving our diverse goals, and an experience that ties us to past and future Levine cohorts. Although some scholars may vow to never use a sleeping bag again, it was an overwhelmingly positive experience, and the incredible happiness I felt so often, reminded me that a fulfilling life is a consequence of unique challenges and diverse company.