Becoming a Levine Scholar: The Opportunity of a Lifetime - Andrea Badillo Pérez ‘21 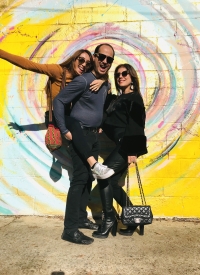 My journey as a Levine Scholar began with a meeting at the beginning of my senior year of high school with my college counselor, Mr. Yager. During our meeting, I was explaining to Mr. Yager that I was set on staying in Puerto Rico for my undergraduate career. He told me he thought I should at least look into this one merit-based scholarship program in Charlotte, North Carolina. I remember barely entertaining that idea given my love and attachment to my home island. At that moment, I knew that if there would be anything that could entice me to even consider leaving Puerto Rico, it would have to be a once in a lifetime opportunity that would allow me to grow like no other experience could. It is now four years later since this conversation, and I am more certain than ever that becoming a Levine Scholar has in fact been that once in a lifetime opportunity––and even more.

During this last semester at UNC Charlotte, I am finishing a double major in Psychology and Biology with a minor in Public Health. I have realized that senior year has inundated me with nostalgic moments where I reflect back on my time as a Levine Scholar. I am constantly reminded during these moments of the countless resources that have prepared me for my next step in my professional trajectory in the medical field. During my freshman year, the Levine Scholars Program (LSP) helped connect me with multiple low-income health clinics in the Charlotte area. These clinics serve uninsured and underinsured patients, many of whom are Hispanic or Latino and are not fluent in English. Because of a shortage in Spanish-speaking healthcare providers, I began volunteering as a medical interpreter for these patients.

The LSP then helped deepen my relationship with two of these clinics through my nonprofit internship experience that summer. As I helped Hispanic immigrants navigate through health insurance enrollment, I became further exposed to the social, cultural, and economic barriers that disenfranchised populations face when seeking healthcare. I began to see the disconnect between health and equity, a theme that followed me on my study abroad experience that same summer to South Africa. Through this LSP faculty-led trip, I focused on the issue of gender-based violence for my independent project and explored the ways in which political and cultural history has perpetuated health injustices for South African women.

With a desire to learn and do more about health-related injustices, I sought out a research opportunity through the LSP Research Mentorship Initiative during my sophomore year. This initiative is meant to connect Levine Scholars with lead researchers on campus and throughout the Charlotte area to increase exposure to and participation in a diverse array of projects that serve our community. Through the initiative, I was particularly connected with a researcher in Atrium Health’s community research division on a project about food insecurity in another low-income clinic. After screening patients to identify their food-related needs, I helped provide an emergency two-day supply of healthy foods, connected individuals to long-term resources, and conducted interviews to gauge the project’s impact. I notably found that there was a need for fresh produce instead of canned goods. That is when I decided to address this need as one of my LSP civic engagement efforts during my junior year, when I organized a community task force and established a mobile fresh food pantry in a local church right next to the clinic.

As I applied to medical schools at the beginning of my senior year, it became clear to me that becoming a Levine Scholar truly was a once in a lifetime opportunity. I realized that these and many other experiences have molded what I now see as my purpose in the field of medicine: to lessen the inequities that exist in our country and world by increasing access to culturally competent, socially conscious, and unconditionally compassionate healthcare. Looking back, it is clearer than ever that the tools and support from the Levine Scholars Program allowed me to get to where I am today. I think back to sitting in my room in Puerto Rico as a high school senior reading about LSP through the website and seeing it as such a distant possibility for myself. I remember my parents expressing their apprehension about taking me to finalist weekend because of the fear of me being the first of the family to potentially leave my island for college. I also remember the stress of which outfit to pick and getting lost with my parents on our big campus which, although beautiful, can be overwhelming for first-time visitors. So, if there is one good thing that I can say about a virtual finalist program, it’s that these would not be things to worry about!

And as if it were yesterday, I remember the 180-degree shift in both my and my family’s mentality about leaving Puerto Rico and pursuing this opportunity after finalist weekend ended. I left North Carolina on a seemingly ordinary Tuesday, anxiously waiting to hear if I had been chosen as a Levine Scholar, knowing this was everything and more that I wanted for my college experience. Having been granted a spot in the class of 2021 remains one of the biggest blessings I have ever received, and not only do I say that proudly as a panelist for this year’s finalist program, but so do my parents as panelists themselves!

With all this being said, I cannot emphasize enough how much the LSP has meant to me, not just because of my own unique journey, but more importantly because of the exposure it gave me to the amazing people that make up this program. What is most special about the LSP in my eyes is without a doubt the opportunity it gives you to grow alongside people who might have entirely different academic interests, but with the same omnipresent purpose to serve the greater good. The LSP utilizes an unmatchable combination of pre-professional, service-oriented, and hands-on experiences that each build upon one another to create leaders of change and hope in whatever field scholars decide to explore. So, although things are virtual this year, I am certain that this sentiment and promise of what it means to be a Levine remains. Just as it has been true for me and for those around me, I can assure that it will continue to be true for those to come.