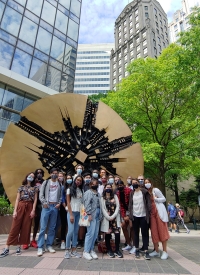 Charlotte was not on my map. Roughly 700 miles away from my home and having no connection to my life, the city was out of sight and out of mind. I virtually forgot it existed. In other words, Charlotte Immersion was a much needed experience.

On the morning of Charlotte Immersion, the 2024 cohort was asked to raise their hands if we had googled Charlotte before moving onto campus last fall. I was one of maybe four or five who had, but I hardly needed the reminder that I was an alien to the city. For the past eight months, I had been disoriented and confused, attempting to relate to and adjust in this new city about which I did not know even the slightest thing. Of course, I had googled Charlotte before I flew in for finalist weekend, and of course, I had walked around Uptown a couple of times during my freshman year, but none of this did any good to help with the fact that I was not a native. I was well-intentioned and curious, but nonetheless an outsider. My educated guess is that nearly every out-of-state Levine Scholar feels a little bit like this during their freshman year.

Charlotte Immersion was exactly what I needed to get my bearings. From the Levine Museum of the New South through all four wards to Elmwood Cemetery, I began to put together the pieces that made up Charlotte. All of these elements that we had researched and presented in our Freshman Year Levine Seminar slowly but surely began to have ties to the physical world, no longer remaining these abstract ideas that I could not quite place when I was sitting at a table in the Honors College.

However, it was more than simply getting my bearings. I was still an outsider looking in, but there was this odd feeling like I was being pulled into the city. When you learn about someone’s or something’s history, you start to become a part of it, and Charlotte Immersion was almost an invitation to us outsiders to begin weaving ourselves into the story of Charlotte. As Levine Scholars, we have a place in this Charlotte community. We have an obligation not only to lift it up but also to let ourselves sink into it. Our four years as Scholars gives us time to put down our roots in the city, and Charlotte Immersion is an opportunity that few college students throughout the country have to become a member of the community in the city where they attend university. It is undeniably a privilege to be welcomed into a community. After my first full year as a Levine Scholar, I feel what a privilege that is.

432 days. This may sound random, but it represents the length of time it took for me to finally meet everyone else in our cohort after a chaotic year different from anything I could have imagined. Charlotte Immersion was the moment I finally got to see myself as a college student and not just an outsider.

From the moment I arrived at First Ward Park, I felt out of place. Every single person around me had spent an entire year and summer together while I had only ever seen them through a screen. I did not have the same opportunity to form bonds with everyone. This had also only been the second time I was in the city since David and Lucas (two other scholars in my cohort) took me out the night before. The only thing I could tell you about the city of Charlotte was that it had pretty lights at night. It was an overwhelming amount of difference that I was not prepared to take in. However, I was quickly welcomed and greeted by everyone, making me feel less nervous about the drastic change of scenery.

From there, we began the journey through Charlotte and its history, which made it more real. It was no longer just pictures and maps in a presentation. Though hours of research was spent on the history of Charlotte, actually being able to see it gave us a new perspective on the entire area; each of which had its own story to tell, as did every person walking on the street. It offered a unique opportunity most do not have the luxury of experiencing. Moving through the various distinct landmarks around Charlotte made it feel more like home rather than just the big city that is four and half hours away from the place I call home. We as humans learn to love through experience, and without it, things just are not as real to us. Charlotte Immersion served as the moment where I got to actually connect, not only with my cohort but with the community of Charlotte itself. It is an opportunity some take for granted, but it really is more of an honor to be a part of a community full of so much promise and opportunity. Seeing and hearing about the city's past builds a sort of appreciation for all the changes and advancements it has gone through. After 432 days, I have finally found the new community I want to be a part of.