From Backcountry to Frontcountry: A Community Formed Over Food - Dhairya Desai and Caroline Wingerd, ‘25 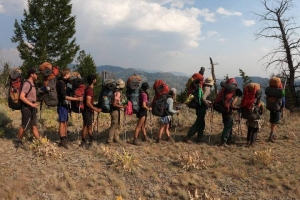 Imagine 20 individuals meeting each other for the first time at an airport, getting onto a bus, and heading off to live in the wilderness, in tents, for the next month. It sounds like the setting for some binge-worthy TV series, and yet this was real-life. Nervous. Anxious. Excited. Afraid. Hopeful. All of these emotions and feelings crossed our minds as we embarked into the unknown and wilds of Wyoming as a brand new Levine Scholar Cohort. Little did we know that a mere few weeks later, we would emerge from the wilderness, ride the same bus back to the airport, and depart to our homes no longer as strangers, but as a family. From burnt cookie cakes to delicious caramel pancakes (thank you Werther’s Caramels), from upside-down maps and going the wrong direction to crushing ten-hour days and summiting mountain peaks with views for miles and miles, and everything in-between, we formed the bonds and laid the foundation that is formally known as the LSP Class of 2025. Our journey into the wilderness was molded by things both little and small- from the meals we shared, beauty appreciation moments (BAM’s) we all soaked in, the tears, songs, laughter, and accomplishments we all achieved individually and collectively, and our introduction to and development of different types of leadership.

In what ways did your expectations change throughout the course?

Riding the yellow school bus to the backcountry, we hummed with anticipation, fear, and Dolly Parton’s “Nine to Five.” None of us knew exactly what to expect, except that it was going to be hard. We knew we would be pushed to our limits, but supposedly, according to all the older scholars, we would love it. For me, it took until the last five days to love the course, but eventually, I appreciated the unpredictability of daily life. We couldn’t expect the weather to cooperate, but we were fully prepared for any precipitation or blazing sun. We couldn’t expect the trail to be visible or walkable, but we learned how to navigate regardless. The lack of expectations opened us all up to change, resulting in growth and “tolerance for adversity and uncertainty” as the NOLS instructors would say, forging a community that could withstand any trials the wilderness presented.

Not having any experience in the backcountry, my expectations going into the course were solely based on the dangers of being alone, and my subpar outdoors skills. While these expectations were what I began with, that quickly changed as I stepped foot on the bus. Our trip to the backcountry was filled with excitement, counting cows, and songs. While I knew that the next month was going to test our limits, I also knew that the people I was with would make each moment memorable. On our third day, a day filled with treacherous deadfall and 10 hours of hiking, I soon realized that this group is my family for the next month and I can count on them for anything to come in the next four years and beyond. Coming closer to the end of the course, I started to really grow a love for nature and the lifestyle that came with living in the backcountry. From being fearful and wanting to go back home in the beginning, my perspective changed to being grateful and wanting to stay longer when we left.

How did the food at NOLS shape our experience?

Sharing meals, snacks, dinners, and baked concoctions was an important part of group growth. Even in the first couple of days, I got close to my cook group as we dreamt of home-cooked dishes and attempted to make a cookie cake for group morale. Because the cooking environment and dietary restrictions were new to everyone, we bonded in bowls of non-descript mush. Even when we couldn’t stand another bite of pasta and beans, we emptied the hot sauce bottle and poured it down. Together.

Now we share meals in the dining halls-- conversation filled with both course loads and memories of NOLS. Eating together became a routine and now that we’ve entered yet another new environment, we continue to share those moments as a cohort.

Being part of a group with multiple people having dietary restrictions meant that difficulties cooking would definitely arise. In our group, the students were split into three cook groups, and during the first ration period, the four students that were vegetarian were put together, one of them being me. During the first ration period cooking was easy as all of us had the same restrictions, but as we switched our cook groups, cooking a meal that everyone would enjoy became difficult. At times we would have to compromise on either starting to cook much earlier if we had to cook a vegetarian and non-vegetarian meal, or just decide to cook a vegetarian meal. Though food was repetitive and sometimes not the best, it served as a pathway for us to connect and grow closer with one another.

What did you gain from your leadership roles on the course?

My leadership resume is slim, so taking responsibility for the wellbeing of my peers while we hiked without instructors for several days terrified me. Leading up to Independent Student Group Expedition (ISGE), despite all the preparation and lessons, I was incredibly anxious. But thanks to my group and our relatively successful hike-- I came out more confident in my abilities to lead. I know NOLS actively tries to produce strong leaders, but I was not expecting the curriculum to actually enrich my leadership skills. One of the most important skills I worked on was knowing how to take care of the well-being of the individuals in our group, including myself. If one person struggles with the day’s hike, we all need to adjust. Otherwise, we have no chance of reaching the final “X.” I’m so thankful for the changes NOLS made in my personal mindset and I look forward to continuing to grow with the same group of peers.

Coming into NOLS, I came with just a little experience in a leadership role from my high school, but nothing as close to what I was doing at NOLS. Throughout the course, there were many different leadership positions that I was put in. It first started off with just being a leader of the day, which then turned into ghosting, and soon after came Independent Student Group Travel (ISGT) and ISGE. All these different levels of leadership allowed me to change my own definition of a leader and start to grow into the leader that I want to become. At NOLS, learning to be tolerant of uncertainty was an important skill that I had picked up. For example, During one of my leadership days, the weather was not cooperating and we had to change our hiking path midday. It added many more hours and miles to our route, but understanding the importance of the wellbeing of the group and not just taking the easiest path, carrying our 60lb packs even further didn’t matter.  We all safely made it to our X, and enjoyed more singing and playing trail games like “Contact” along the way. Each day and each of my roles on the course slowly molded my leadership style, and now coming out of NOLS I have learned how to work with others, be confident in my instincts, and know that it is okay to lean on others when you have a bad day.

As we returned from the front country, our separate busses convened by chance at a rest stop somewhere in Wyoming. With shock, we ran to each other-- trying to share and absorb as much information as possible. We smelled bad and our skin had a solid layer of dirt, but nothing stood between us at that moment. Our two separate LCLE expeditions instantly melded back together into one cohort. Now, we’re all together again on campus, united in quite the shared experience and excited to take on the next chapter of our lives. We look forward to community and civic engagement, study abroad, exploring our interests and all that UNC Charlotte and the surrounding city offers, and are already looking forward to hearing from next year’s first-year students as they embark on their own unique NOLS expedition.